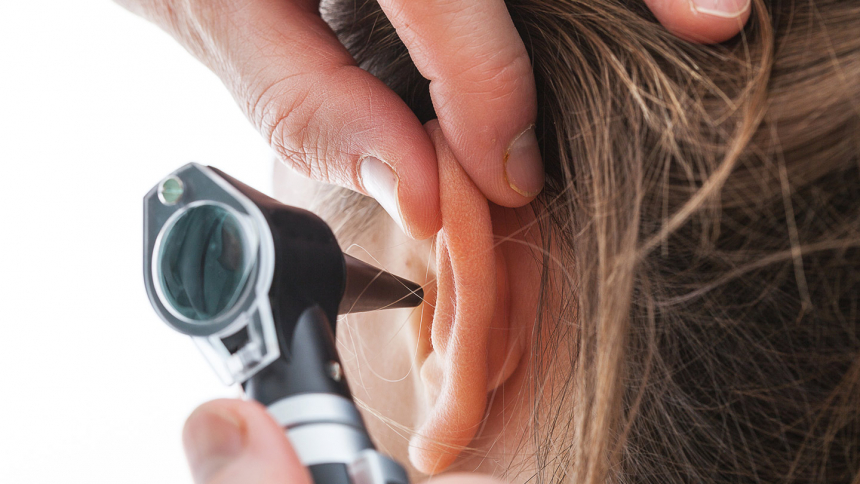 Antibiotic resistance poses an extreme risk for public health, with over 20,000 annual deaths related to antibiotic resistance in the U.S. alone. Reducing unnecessary antibiotic prescriptions may reduce resistance, yet doctors continue to overprescribe antibiotics to treat middle ear infections (otitis media, OM). In fact, about 76% of OM doctor visits result in a prescription; these prescriptions may not consider that acute otitis media (AOM), which is bacterial, often clears without medication, or that OM can be viral as well. Taking antibiotics not only induces individual-level resistance, but also exposes that person’s microbiome to antibiotics. Consequently, nonlethal bacteria may laterally transfer resistance genes to disease-causing bacteria in a future infection (Smith et al. 2015). Watchful waiting (WW) is when a caregiver has access to antibiotics but does not administer them to a child unless their OM symptoms worsen or do not improve in a certain time frame, which may reduce antibiotic abuse (Lieberthal et al. 2013). Penn State researchers Erina MacGeorge, Rachel Smith, Emily Caldes, and Nicole Hackman analyzed how effective pediatrician WW advice is when given to caregivers.

MacGeorge et al. applied advice response theory (ART) to understand how caregivers utilize physician given WW advice. ART is comprised of multiple interacting factors that lead to a caregivers’ intention to comply, including: quality of advice, trust in the physician, capacity to carry out WW, advantages of WW, and negative emotions associated with WW (e.g. anxiety, frustration). 373 parents with children 1-5 years old participated in the study through Qualtrics.com, a common health research site. On average, participates agreed WW was advantageous, thought they were capable of monitoring their child’s symptoms, somewhat trusted the physician, felt somewhat negatively towards WW, and intended to comply with WW in the future. By testing multiple hypotheses with regression models, MacGeorge et al. found that the variables interacted in interesting ways, for example: a parent might see the advantage in WW, trust the physician, and consider the advice high quality, but may not comply with WW in the future. Further, advice quality and negative emotions were strongly correlated and mediated other variable interactions.

Although this study shed light on how caregivers perceive and act on antibiotic use advice, ART has limitations in predictive power. Further, WW advice alone may not be enough to reduce OM antibiotic overuse at a large scale. MacGeorge et al. suggest physicians take extra time to explain WW thoroughly to caregivers and address their concerns and frustrations to increase implementation.