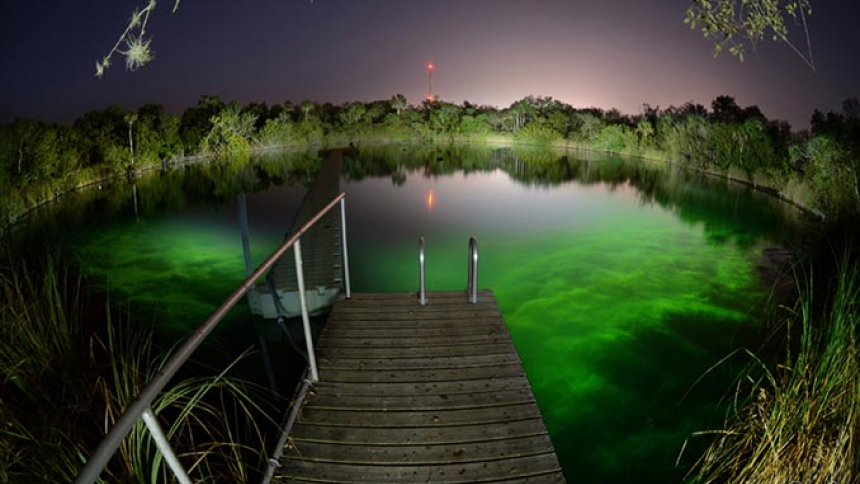 How did Earth become oxygenated?

There are many hypotheses out there as to how Earth began. One of these proposed by Canfield (1998) suggests that there was a great oxidation event (GOE) approximately 2.3 billion years ago. The GOE is said to have included increased sulfate levels within the atmosphere, followed by removal of iron, and subsequent oxygenation of the oceans and surrounding atmosphere.

Microbial mats are thought to have oxygenated the Earth’s atmosphere through the utilization of photosynthesis. These mats are the earliest known life forms, and are biofilms that are made up of dense layers of bacteria and Achaea that are typically found at the interface of different substrates such as water and sediment. It is hypothesized that oxygenic photosynthesis could have been taking place long before the oxygenation of oceans occurred.

Little Salt Spring in Florida serves as a hypothetical analog of the Earth’s oceans prior to the GOE. A previous study identified the presence of red microbial mats containing Cyanobacteria, and found that these mats are capable of performing both oxygenic and anoxygenic photosynthesis. However, it was found that the presence of sulfide inhibits oxygenic photosynthesis. Jennifer Macalady from the Department of Geosciences at Penn State and her collaborators investigated whether these findings are due to the environment of the lake itself, or whether they hold true in a controlled laboratory setting.

These findings suggest that iron may have played an important role in the oxygenation of the Earth’s atmosphere and oceans. The authors hypothesize that iron accumulation occurs in the photic zone where sunlight hits, and sulfide inhibition of oxygenic photosynthesis is prevented. It is still unknown how sulfur cycling occurs in the depths of microbial mats in which no sunlight is present, leaving room for future studies. Additionally, determining which species have evolved to be able to tolerate and survive in such a harsh environment like microbial mats may shed light on the evolution of the fauna and flora of early Earth.