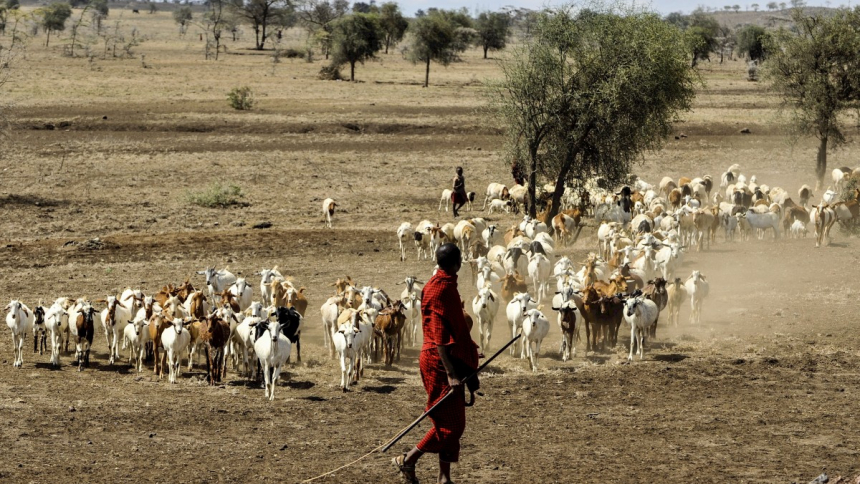 When your livelihood depends on raising livestock, either for income or sustenance, an important part of your job is keeping those animals healthy. This is true for animal farmers world-wide and is especially so for countries whose economies rely heavily on agricultural production. Thus, prevention and eradication of livestock infectious diseases is a high priority, such as in the case of Peste des petits ruminants virus (PPRV). This particular virus causes severe symptoms and high mortality in cattle, goat, and sheep, leading to an estimated $1.45-2.1 billion USD in global annual losses.

There is currently a global effort to eradicate PPRV, which has rapidly spread from its discovery in Côte d’Ivoire in 1942, to several other countries in Africa and Asia today. However, eradication would be difficult to achieve without identifying key factors in transmission of the virus. A trans-continental team of scientists led by recent PSU Biology and CIDD graduate Dr. Catherine Herzog, and including CIDD researchers Isabella Catadori, Vivek Kapur, Peter J. Hudson, and Ottar Bjørnstad, recently identified several important practices in livestock care, or animal husbandry, that influence the spread of PPRV within communities.

Additionally, the team wanted to know how the per capita contact rate between animals compared to the PPRV force of infection and the self-reported household herd size. In doing so, the authors identified a pattern suggesting that the rate of PPRV transmission did not increase with increasing household herd size. This finding reflects known animal behaviors when herd sizes increase, in that animals form social cliques rather than interacting randomly. This pattern can be incorporated into future models of PPRV transmission and improve the accuracy of control plans generated from these models as they are better capturing real-life processes.

In countries like Tanzania, where there is a relatively high rate of PPRV infection, and a heavy reliance on livestock agriculture, it is crucial to identify how the disease is spread in order to stop it. With the help of results from Dr. Herzog’s study and others, global eradication is an achievable goal, because vaccine efforts can be targeted towards the areas in which these husbandry practices are common, and viral circulation is likely to be higher. In the meantime, husbandry practices can be managed and adjusted to reduce the spread of PPRV.