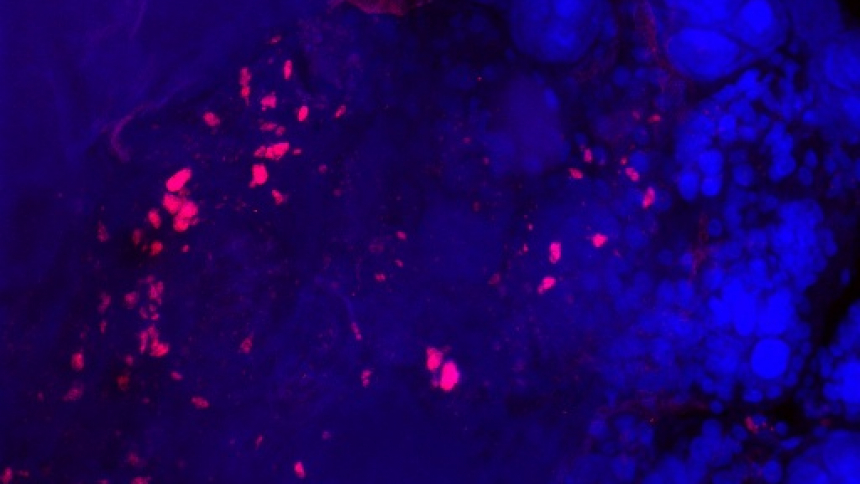 Wolbachia are common bacterial endosymbionts that naturally infect approximately two-thirds of insect species as well as many arthropod species. These bacteria are able to manipulate their host’s reproduction to facilitate their transmission throughout the host population. As such, the ability to colonize the germline is vital to the proliferation of the Wolbachia. In addition to its ability to spread through host populations, Wolbachia is well known to interfere with pathogen development within their hosts, which makes these bacteria ideal candidates for the control vector-borne diseases. However, Wolbachia seems incapable of infecting some insect species. For example, there are no natural infections of Wolbachia in wild populations of Anopheles mosquitoes, the vectors of human malaria. However, Wolbachia can infect Anopheles cells in vitro and Anopheles somatic tissue in vivo.  In this study, led by CIDD Professor Jason Rasgon and research associate Grant Hughes, scientists examined the germline infectivity of two divergent Wolbachia strains with several species of insects, including Anopheles mosquitoes.

To develop a more rapid and successful technique to infect hosts with Wolbachia, these researchers used ex vivo cultures of the host germline (ovaries and testes), providing a controlled system in which they could examine infection. Five host species (Drosophila melanogaster, Aedes aegypti, Anopheles gambiae, Anopheles stephensi, and Culex tarsalis) were used in the experiments, each of which varied in their natural Wolbachia infection status; D. melanogaster were naturally infected and cured, Ae. aegypti were uninfected yet known to be susceptible, whereas An. gambiae, An. stephensi, and C. tarsalis were uninfected. Using qPCR, the scientists found that the male and female germline tissues of all five insect species were susceptible to Wolbachia infection. Next, the researchers used qPCR to analyze the effects of different strains within each host species. The wAlbB Wolbachia strain from Ae. albopictus resulted in much higher titers of bacteria in the germline tissue of the closely related Ae. aegypti compared to the other strains tested. Similarly, the wMelPop strain from D. melanogaster infected fly ovaries more efficiently than mosquito germline tissues. Importantly, the wAlbB strain infects Anopheles germline more readily than the wMelPop strain, suggesting this strain is suitable for further attempts to infect the malaria vector. To confirm that the ex vivo culturing method was biologically relevant, the researchers observed that the titers of wMelPop in the D. melanogaster ex vivo cultures matched the levels of infection from the ovaries of naturally infected flies. This confirmed that the ex vivo culturing method is a useful technique to assess Wolbachia-host associations.

In addition to developing a useful technique to assess Wolbachia-host relationships, this research provides support for the ability of Wolbachia to infect Anopheles mosquitoes, which indicates that Wolbachia could be employed as an agent to control the spread of malaria.