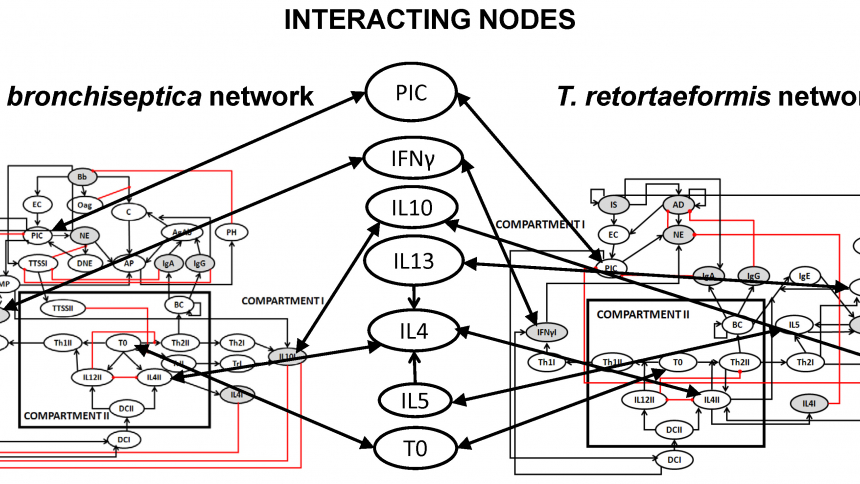 Co-infections commonly occur in natural animal populations including humans. Much of the current literature of the immuno-dynamics of co-infections tends to have a narrow scope, for instance, focusing on the effects of only one of the pathogen species or the dynamics of particular immune cells. Though the information acquired from these studies is important for understanding crucial mechanisms of co-infections it is critical to address this issue at individual level and explore how the systemic and local immune responses modulate parasite interactions and the dynamics of the constituent pathogens.

Researchers at CIDD, Juilee Thakar, who is now at Yale University, and professors Isabella Cattadori and Réka Albert, along with post-doctoral researchers Ashutosh Pathak and Lisa Murphy, used a combination of laboratory experiments and mathematical modeling to develop a holistic view of immune responses to co-infections with the respiratory bacterium Bordetella bronchiseptica and the gastrointestinal helminth Trichostrongylus retortaeformis.  Network-based discrete dynamic models of single infections were initially developed using laboratory experiments and the current knowledge of bacterial and helminth immunology; the models were then combined with a co-infection model that was finally tested against a laboratory co-infection. These models showed that  the clearance of B. bronchiseptica from the lungs was not affected by the presence of the helminth. In contrast, bacteria accelerated the reduction of T. retortaeformis intensity in the small intestine. Simulations suggested that the mechanisms of B. bronchiseptica control in the lungs were similar between the single and co-infection, while the robust and early recruitment of neutrophils, in addition to antibodies and eosinophils, enhanced helminth expulsion. This study was able to capture the immune-dynamics of bacterial-helminth co-infection  as a whole host response and identified key immune cells and functions that contributed to the changes in immunity between single and co-infections.