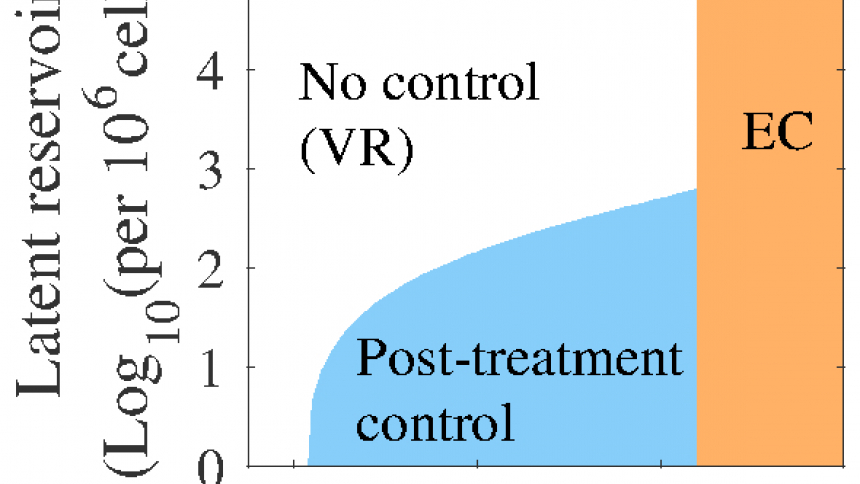 Antiretroviral therapy is used to treat and control HIV infection, but typically continual use is required to maintain low HIV viral loads and and associated benefits in HIV+ patients. Viral rebound to high, pre-treatment levels, and re-establishment of chronic HIV infection, usually follows treatment suspension. However, a recent study revealed that some “post-treatment controllers” can control infections after cessation of treatment. A third group of rare “elite controllers,” first identified in 2005, are able to control their infections even in the absence of treatment.  Understanding the circumstances surrounding treatment outcomes is one important way of understanding underlying virus-host interactions and for improving treatment strategies.

CIDD mathematician Jessica M. Conway and her collaborator Alan S. Perelson used mathematical models to test their hypothesis that the balance between latent reservoir size and immune responses could explain the range of outcomes observed in treated HIV+ patients. The latent reservoir, i.e. the reservoir of cells latently infected with HIV, is a major obstacle in eradication of HIV. It is thought that activation of infection in these cells is the source of viral rebound after treatment cessation. Immune responses can naturally control viral infection, but may become exhausted if over-stimulated. Thus their hypothesis is that a large influx of newly activated latently infected cells, associated with a large latent reservoir size, exhausts immune responses and causes viral rebound. If the latent reservoir is small, the influx would also be small, and perhaps immune responses would not become exhausted. As a result, if immune responses are sufficiently strong, some patients may be able to control HIV infection (post-treatment control). Conway and Perelson developed an ordinary differential equations model of HIV viral dynamics in-host, including latent reservoir dynamics and immune responses, specifically cytotoxic T lymphocytes (CTLs) dynamics. The model was then used to investigate their hypothesis and make testable predictions on virus-host interactions and potentially effective treatment regimes aimed at inducing post-treatment control.

Conway and Perelson’s model underscores the importance of the interplay between latent cell activation dynamics and CTL responses, which they show can also explain the lag between treatment cessation and viral relapse for individuals who are not post-treatment controllers. The model findings were published in PNAS this month.