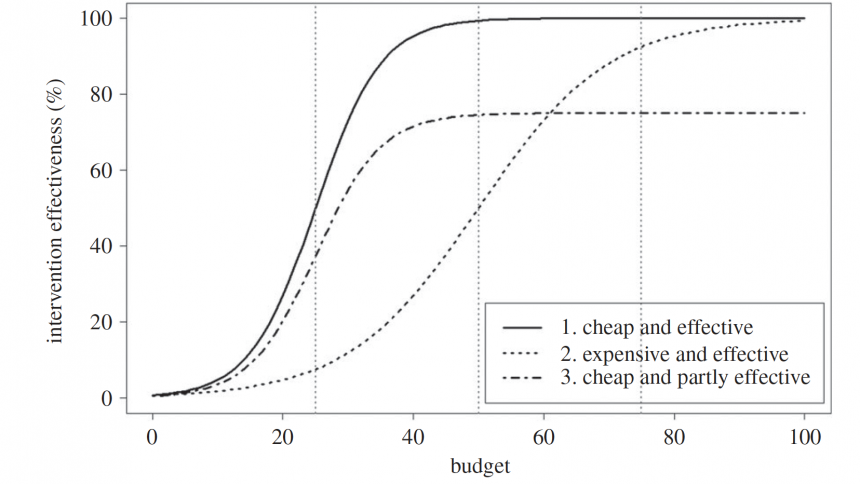 The management of an explosive disease outbreak, such as 2014 Ebola outbreak in West Africa, can be very challenging, because the decision-making process is affected by myriad sources of uncertainty. On the one hand, there is epidemiological uncertainty - how the disease will spread? who is most at risk? etc. On the other hand, we may also face operational uncertainty about how effective interventions can be given logistical and budget constraints. To identify the optimal intervention, it is essential to assess both sources of uncertainty simultaneously. An epidemiologically effective intervention might not be optimal if its costs exceed available resources.

An international team of researchers from Penn State University (Shouli Li, Matthew Ferrari, Ottar Bjørnstad and Katriona Shea), USGS (Michael Runge), Vanderbilt University (Chris Fonnesbeck), University of Warwick (Michael Tildesley) and The University of Western Australia (David Pannell) used Ebola outbreak management as a case study to concurrently assess the effect of these two key types of uncertainty on the identification of the optimal intervention, and use this information to inform decision-making for the management of disease outbreaks. They recoded 37 published Ebola models in a common framework to evaluate candidate interventions that are widely used to control Ebola outbreaks under different budget conditions.

They found that the ranking of interventions is jointly determined by their epidemiological impact, their achievable effectiveness, and the budget available, as hypothesized. Their study demonstrates that significant public health improvements could result from a careful examination of both epidemiological and operational uncertainties within the same modeling framework. Appropriate information gain could reduce expected caseloads by up to 57.3%, which would equate to 16,418 fewer cases, or 6,489 fewer deaths, in the 2014 Ebola outbreak.

This work highlights the importance of resolving uncertainty in disease outbreak management from the standpoint of the decision maker, and emphasizes that it is essential to assess epidemiological and operational uncertainties concurrently within the same framework. This study demonstrates a useful framework within which to streamline the management decision-making process for Ebola. More broadly, the approach developed in the current study has the potential to be widely applied in other outbreak settings, to facilitate rapid, evidence-based decision-making. Figure caption: Illustration of three different types of relationship between the expected effect of candidate interventions and the corresponding budget (on a scale of 0 – 100). The three dotted grey vertical lines at budgets of 25, 50 and 75 represent low, intermediate and high budget levels, respectively.