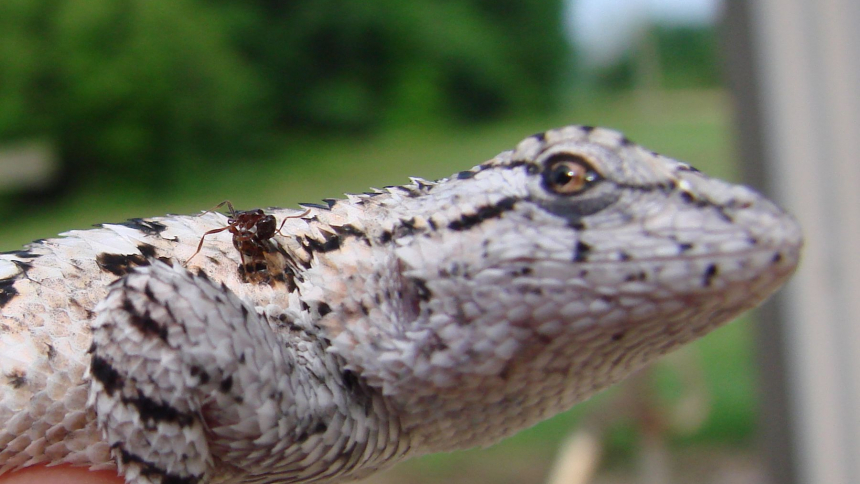 As the human population continues to grow exponentially, anthropogenic stressors are becoming increasingly widespread. Increases in human migration and global trade have caused many non-native species to be introduced in new areas, where they may wreak havoc on the local ecosystem.

CIDD professor Tracy Langkilde and post-doctoral researcher Sean Graham are investigating the impact of invasive fire ants on lizard populations near the Florida pan-handle. Fire ants first arrived at the port of Mobile, Alabama in the 1930’s, and have since spread to much of the southern United States. Notably, these ants can kill a lizard in under a minute and have significantly impacted lizard populations.

In the current study, researchers tested lizards from multiple fire ant- invaded and non-invaded sites in the south-eastern United States. They tested whether invasive predatory ants are increasing stress levels of lizards, and any concomitant reduction in immune function due to energetic tradeoffs. Baseline and acute stress levels were significantly higher in lizard populations collected from fire ant invaded sites, as compared to those from non-invaded sites; this was especially true among female lizards. The researchers also tested the anti-bacterial properties of serum from these groups of lizards as well as the antibody hemagglutination response to a novel antigen, and found no difference, indicating that this aspect of the immune response is unaffected by the invasion of fire ants. Interestingly, lizards from ant- invaded sites harbored fewer parasitic mites on their skin than lizards from non-invaded sites. This suggests that other immune functions, such as tolerance, or the abundance of ectoparasites in the environment may be directly affected by the presence of fire ants.  Future studies will investigate associations between parasite load and the lizard microhabitat. Overall, this work adds to our growing understanding of how shifting ecosystems impact resident vertebrates as well as the organisms they host.